warblers no larger than
leaves emit songs louder
than I could bellow—
yellow in green bush
flickering in May mist
spectral among primary
mysteries of spectrum—
a chlorophyll trance
induced by light seduction.
The tree enticing light,
the water entrancing light.
The light mirrored and then
refracted into river shadow
where carp or suckers flurry
under the bent-over willow.
Green smugly shines forth
having eaten pure light, its
rare performancerenewed
when spring aligh ts again.

Rose, Dante
knew, leads you
through
Paradise, a
walled and trellised
garden
I thrive on you
rose, your word
arousal
from earth up
you rose and still
you spring
Penn Kemp

Ta-Nehisi Coates, The water dancer celebrates the power of story and lineage.

What better way to begin Black History Month than with this powerful novel! To be read along with Colson Whitehead’s The Underground Railroad. Brilliant, immersive, majestic, magic.

“I understood Conduction, understood it as a relay of feeling, assembled from moments so striking that they become real as stone and steel”

Alexander McCall Smith, To the land of long lost friends

Listening to Alexander McCall Smith’s To the land of long lost friends, I’m conflicted. The easy charm, the delicious accents with rolling r’s, the satisfyingly happy endings, the morality: yes. But the characters are tropes out of Little Black Sambo. When I was five, this forbidden book was my favourite; I read it to my dolls off by heart, loving the exoticism, the bright colours, the adventures… and the pancakes! How do we recognize colonialism in ourselves? I know Alexander McCall Smith was born in Africa.  Would he recognize his lightly white-washed stories in present-day Botswana?

Inland is the better novel by far, though the characters are stock in both. The landscape moves from “the former Yugoslavia” (which always suggests Serbia) to the American West of the past. Here’s Obreht has capture the feel of the land, and dialogue. Both novels rest in a mythic premise, a fascination with folkloric beasts.

A gentle read twinning two sisters, two countries. So refreshing to read a deeply felt story where the turmoil is internal, not political nor ecological. Though wolves are involved!

Olga Tokarczuk, Drive Your Plow Over the Bones of the Dead: A Novel

What’s not to love on a blustery winter day? Astrology! Epithets for each chapter by Blake! The unreliable narrator a madly determined old woman, as ferocious as she is tender. And does she love animals!

This poem will be published in P.S., a collaboration with beloved Sharon Thesen to be published by Kalamalka Press in the spring of 2020.

As the Initiation of Imbolc begins

My birds are ruder than yours, they
squabble a dance of dominance.  But
I offer you the scarlet of cardinals in
return for a glimpse of a red-shafted
flicker at your feeder.  Let ‘em meet.

We are in the same weather thousands
of miles apart and yet I carry an image
of you shoveling alongside the walk,
heaving snow with a cheeky grin that
by the end of the driveway is grimace.

Though we talk, I can’t quite figure out
what you’re saying.  Your mouth moves,
your lips shape words that fly like birds
on the frost breath, cartoon apparitions,
and conversation curls in upon itself.

Response quickens into a new poem.
Exhalation is exhilaration in the cold.
Small hairs in my nostrils are spiked:
a word which leads me to mull over
Burgundy and cinnamon spiced hot.

Thought our forecast is bleak mid-winter,
snow squalls are more easily weathered
than political disruption and upheaval.
Trump addresses the state of disunion.
The blood and full blue moon eclipses.

A phrase from a poem I read today—
“in the revolving question of a field”—
leads beyond the shoveled path to
the woods we think we know.  As if
trees belong or we to one another.

All your particulars of sheen sparkle,
snow in pale sun, the showing forth:
Candlemas, Celtic cross-quarter day.
Baby and his mother presented pure.
Bridget spreads wide her crimson cloak.

Sharon and Penn at Caetani Cultural Centre, thanks to http://www.kalwriters.com/residency/residency.html.
Photo by Roberta Pyx  Sutherland

All the groundhogs agree on early
spring, their vision 20/20 in new snow.
We mark the myth with earth magic.

not. A quick survey and she ducks back
down the cold tunnel of time into long
distant mythic dream. We don’t know

what the groundhog dreams when she
scurries home to her warm, hushed den.
Edible flowers from my garden, I bet.

Or the security in curling round herself
as her squirming pile of pups blindly
snuffles, eyes unnecessary in the dark.

Mary now purified, free of confinement
shows forth her babe. Forty days respite
in temenos, in shelter, and they call that

impure. The labour in giving birth impure!
Longer light at last starts to awaken her.
Goddess has recovered to hold her child.

Persephone in Hades eats the pomegranate
that ensures her return: red, translucent and
succulent fruit seeds, cased in possibility.

She changes from Crone to Maiden once
more and always, grieving Mother consoled,
together to celebrate the Feast of Torches.

We lay out scarves for Brighid’s blessing on
outer evergreen boughs. We retrieve white
cloths next morning from beneath topknots of

soft snow that fell all night, consecrated when
Brighid passed over. Her snowdrops here are
snowflakes dropped one by one into many.

Imbolc in the Mother’s belly when ewes lie
near to lambing, drawing milk for a wan sun
on the grand cross: eagle, lion, human, calf.

Initiatory dreams score a long night’s rest.
We celebrate Imbolc, fire festival between
solstice and equinox on the year’s wheel. 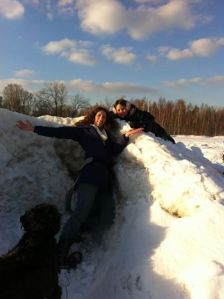 My poem for you, in the beauty of new snow…

This poem is dedicated to London’s spectacular local heroes and Canada’s most decorated ice dance team, Tessa Virtue and Scott Moir.  We’re celebrating their return to competition after a two-year hiatus.

As if you are leaping in the air

As if you are leaping in the air
with Virtue and Moir. As if you
are running perfect simulation.

Lift and fly. Figures are skating,
whirling to wild quads like Sufis
dancing in Dervish reverence.

Le Petit Prince and his Rose criss-
cross the ice to mirror our neurons
effortlessly after ruthless practice.

One haptic system rings in tune with
the other not by happenstance but
exquisite design, creating the perfect

illusion of romance. This pair knows
their true trick is always in landing home.

The poem won second prize in Poetry London’s 2015 Contest. I read it at Landon Library on March 25.

The video and poem are up at Central Library London, http://www.londonpubliclibrary.ca/blog/poetry-london-contest-winner-penn-kemp, and on https://www.youtube.com/watch?v=bGAOOldLE98.

The winning poems are up on http://www.poetrylondon.ca/index.php?/current/contest/ and posted throughout London Libraries all Poetry Month along with videos of our reading at Landon Library!
http://www.londonpubliclibrary.ca/blog/poetry-contest-winners-announced-0

Thanks to Poetry London!

The photo of daughter Amanda and me is in Some Talk Magic, Ergo Productions.  Credit: Elizabeth Cunningham.  Below are Amanda and her daughter Ula with Benny the Bouvier!

Romance of the rose in part-
icular scent, texture, hue
carried and cared
for from you.

rust nips at the coiling edge of
hope, nips and tucks, curtails, till
petal droops, curls and drops
on stone.

Heart suspends suspense
and pauses, skips the beat
to bear what can’t be
born.

The heart does not grow over.
It grows through the lump in
the throat and out the mouth—
new birth of sorts, of change.

Heart knows its kind, knows its
own, knows as well kind
words. They too can cut
clear through skin, so many
layers meaning… what?

To stay kind
of alive in metaphor— beating
beating heart, the rhythm of
survival, thriving.

Your Hermes to my Hestia,
fire-side. 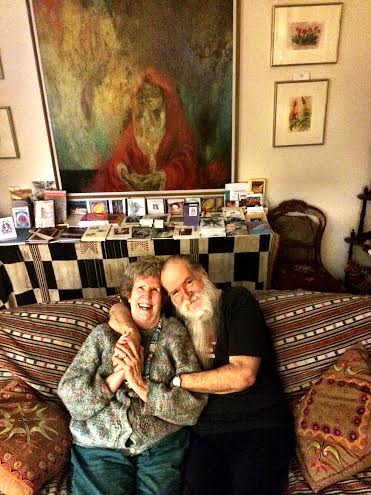