Un prospero y feliz año 2015!  Thanks for your presence ongoing in my life, Lovely Ones!

In tribute to December 26, 2004.  “Facing the Epicentre”, http://www.ourlondon.ca/2011/03/penn-kemp-offers-a-poem-in-aftermath-of-disaster-in-japan/, a poem from the dvd, Luminous Entrance: a sound opera.

“Facing the Epicentre” and commentary is up on http://didiodatoc.blogspot.com/2011/03/poets-and-bloggers-whove-written-to.html.

42.986950 -81.243177
From Steven McCabe’s post, Word Image. Where text meets image. Where the visual intersects the literary.  The poem  and imager was published in Lyrical Myrical Press, Toronto.

The Pageant by Penn Kemp 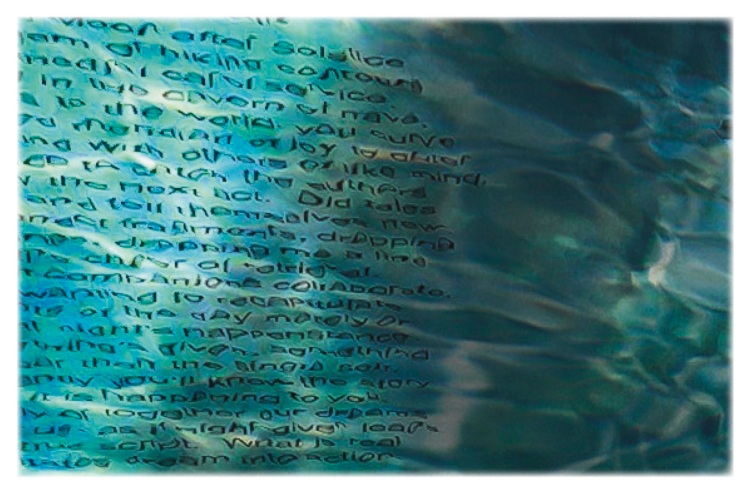 On the Moon after Solstice
you dream of hiking contours
to cathedral carol service.

Singing in the cavern of nave,
omphalos to the world, you curve
on rounded meridian of joy to outer
space, linking with others of like mind.

You race to catch the authors
to know the next act.  Old tales
are told and tell themselves new. 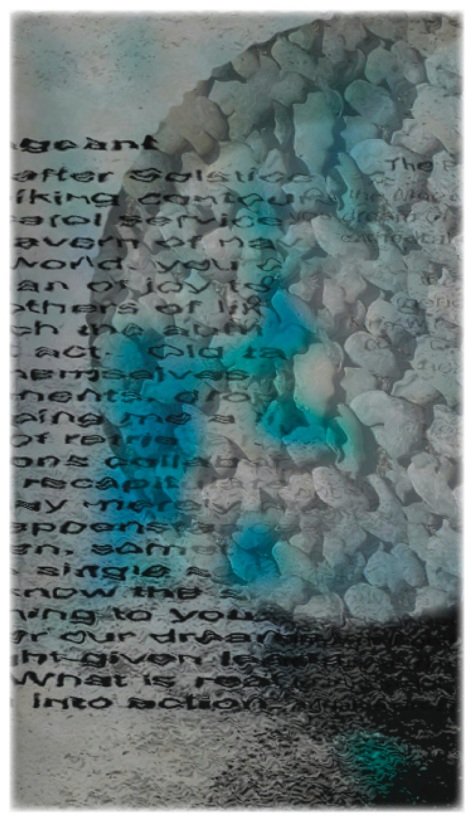 You connect fragments, dropping
your lines, dropping me a line
in the cheer of retrieval. 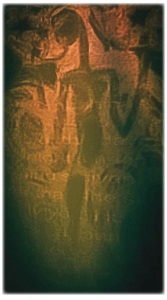 Rings of companions collaborate,
not wanting to recapitulate
events of the day merely or
invent night’s happenstance.

Something’s given, something
larger than the single self.
Presently you’ll know the story
as it is happening to you.

Singly or together our dreams
direct us, as if night-given leads
to true script.  What is real
agitates dream into action. 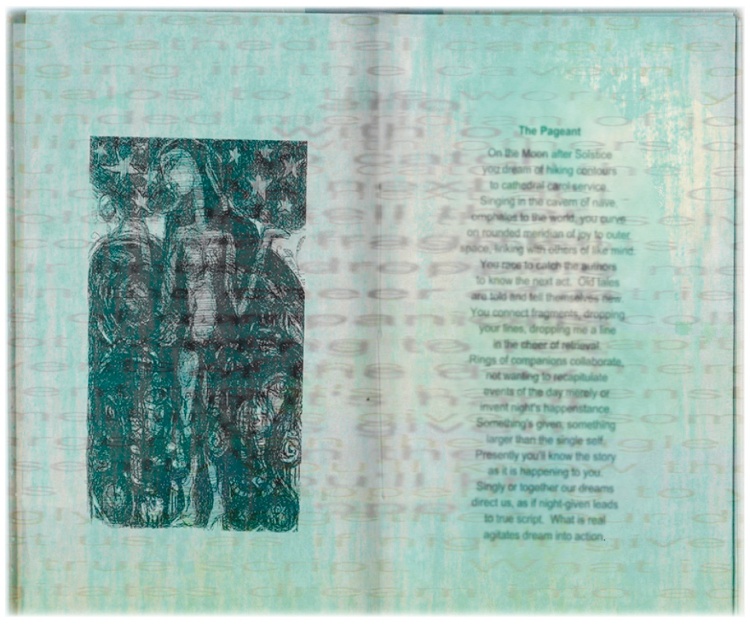 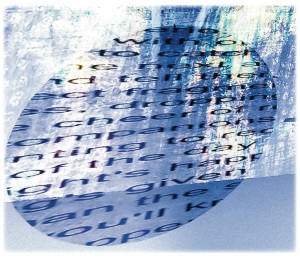 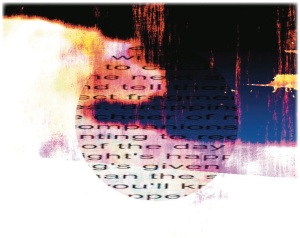 In 2012, Penn Kemp and I published the chapbook Dream Sequins with Lyricalmyrical Press in Toronto. The title refers to Penn’s poetry manuscript. My contribution consisted of 18 ink drawings. I sent Penn a number of scans which I thought related or tangentially connected to her words and she made the final selection. Drawing can be an automatic process, as spontaneous as dreaming, with line unfolding connections not crafted by the conscious mind. My body of drawings 2009 – 2011 expressed a number of intertwined themes & at a certain point Penn and I connected. We were independently working in close enough proximity to our ‘source’ materials that text & image, both floating on a warm parchment paper, felt synonymous. This post was inspired by the idea of using Penn’s words as a design element in constructing digital images while referencing one poem & drawing from the chapbook. 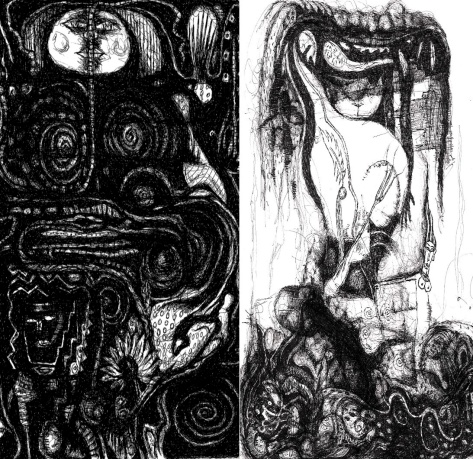 The Pageant by Penn Kemp.  A poem for Solstice.

Steven McCabe and I published From Dream Sequins with Lyricalmyrical Press in Toronto.

Steven writes: “The title refers to Penn’s poetry manuscript. My contribution consisted of 18 ink drawings. I sent Penn a number of scans which I thought related or tangentially connected to her words and she made the final selection. Drawing can be an automatic process, as spontaneous as dreaming, with line unfolding connections not crafted by the conscious mind. My body of drawings 2009 – 2011 expressed a number of intertwined themes & at a certain point Penn and I connected. We were independently working in close enough proximity to our ‘source’ materials that text & image, both floating on a warm parchment paper, felt synonymous. This post was inspired by the idea of using Penn’s words as a design element in constructing digital images while referencing one poem & drawing from the chapbook.”

Tuning in to change | The London Free Press.

Twenty-five years after the murders in Montreal, some of the strongest voices of remembrance and calls for action are in London.

Across Canada, Saturday marks the National Day of Remembrance and Action on Violence Against Women and the 25th anniversary of the Montreal Massacre.

Music and words — all day long — at Western’s 94.9 CHRW stand here for events around the London region. The campus radio station’s Saturday statement All Women’s Voices runs for 24 hours. All day. As it must.

“Our amazing female DJs will be informing and empowering all while playing some of the best female artists out there,” the station says in an admirable call to hearts and minds.

Still to come Saturday for your empowerment and solidarity are contributions by such Londoners as DJ MediaFrenzy, Words literary festival and Poetry Slam star Emma Blue, the city’s former poet laureate Penn Kemp, The Alcohollys and Tina Powell, who discusses missing and murdered women in the aboriginal community.

“The volunteers came to me with what they wanted to do — and I put a call out to the community for anybody else who wanted be involved,” says CHRW’s program director Allison Brown.

The noon-hour ceremony and Ritual of Re-Membering is at the Mother St. James Auditorium, Brescia University College is to be broadcast live. It honours the loss of the 14 women murdered 25 years ago at Ecole Polytechnique, and to all women who have lost their lives to gender-based violence. That’s when Kemp’s poem The Invocation will be heard…

Come and say hello, women. The veils are still
thin and we welcome your presence, fourteen
plus all the disappeared whom you stand for.

As if you were in the prime of life now. As if
your daughters bloomed full-grown around you.
As if your mothers were crying delighted tears.

And if you were here to see what has changed
and what has not, would you hide your eyes in
shame for what has been done, what has not?

Come into the light and tell us how you are. As
if you have life beyond what we recall, remember
before this dark December claims its own again.

This poem was published on Saturday, December 6, 2014 and online: 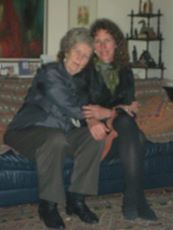 Photo of mother and daughter Amanda Chalmers by Gavin Stairs

What can we do? I beleive art can inspire us to action.  To counteract the silence that all too often surrounds violence, I’ve coined the neologism Siolence.  See https://pennkemp.wordpress.com/2014/11/06/siolence/ and my book, Binding Twine, up on mytown.ca/bindingtwine,

London artist Bernice Vincent’s work graces the cover of the second volume of my Poem for Peace in Many Voices and the frieze continues throughout the volume: see www,mytown.ca/poemforpeace.

In conjunction with Bernice Vincent’s mural Exhibition, “Fourteen
Women” (Montreal, December 6, 1989).  Bernice wrote:
“A frieze-like composition (4’x28’) with silhouettes of fourteen young women engaged in conversation, exchanging ideas and carrying symbolic objects that relate to engineering.  They move against a background textured with fragments of dried plants signifying the seasonal changes in the land which supports and enriches our lives. In the border of the work are fourteen circles which represent the iron rings that engineering students receive upon graduation. The circles are incomplete to signify the sudden loss of the young women’s lives and aspirations for the future.”

“On December 6th, 1989 a young man, enraged by hatred and a misguided idea of a women’s place in the world, entered L’Ecole Polytechnique and massacred fourteen women students. It was an event that awoke many Canadians to the ongoing reality of violence against women in our society. The Ritual of Re-Membering seeks to honour the loss of their young lives, as well as all women who have lost their lives to or suffered from gender-based violence.
The Ritual of Re-Membering has been held each year since the first anniversary of this tragic event and sadly, we must continue to commemorate the ongoing acts of violence that are a daily reality for women in this city, province and country. The ritual moves us into grief and sadness and then lifts us out into hope and power for transformation and change.
We hope you will stand in solidarity with us against gender-based violence.”

Check out the Arc Magazine/Cordite Poetry Review collaboration up now on http://cordite.org.au/content/poetry/ohcanada/.

Great company, great collection. “For both Canada and Australia, there have been very few occasions when such an amazing collection of poets has been brought together under one project [that] thrives on multiplicity, difference, and propinquity. It is with the indefatigable nature – in whatever drives us to write – of the authors and artists involved that will see this project both lasting and notable in both countries for some time to come.”

Walking on the Moon, in Moulay Ibrahim

We have landed they tell us
in the centre for all Morocco
of magic & the old ways
high in the Atlas mountains….

We have heard this.

What we have not heard or seen
happens for the first time
today via the one TV in the one cafe:

“Ha!” says Omar. “What a stunt.
Those Americans are so clever.

But we know. Moroccans
are not easily tricked. This
is a fiction to entertain the people.

Quelle blague.” He pretends to toss
a rock off the dusty floor at the screen.

The crowd in the cafe laugh
at the outlandish gear, the preposterous
instrument & helmet gimmicks
clumsier than any cartoon.

Still scoffing, the moon men jostle outside
& hidden in hooded dun djellabas
melt into the lunar dusk of their grey plateau.