Last week’s poem published today: how relevant is that!
I’m grateful to @Tuck Magazine for keeping poetry current!  Here it is: 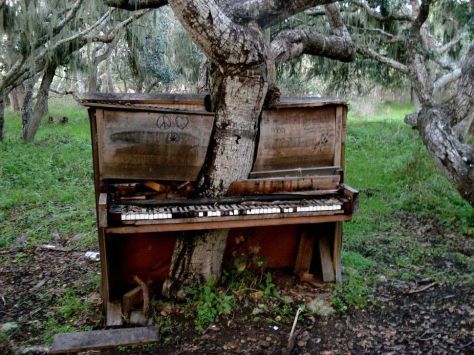 Days of Awe and Hurricane

and the Season’s just begun.

over the bowl of time, suspended as mind
opens to a possibility of expanse, of hope

A momentary equilibrium held like breath
in the balance. A turning point we hold as

we careen toward winter, a turning point to
recall while Trump and cohorts bluster on.

Stillness does not last beyond a moment.
The radio calls for a Humidex over Forty.

Our family of goldfinch flock to goldenrod,
twittering, tweeting, chittering at their feast.

Prince Harry breezes through Toronto traffic,
to celebrate Invictus, all winners out of hiding.

Canada’s “a work in progress,” claims the PM.
Words do not replace realities. Mind the gap.

What we know we cannot say. What we don’t
know fills the airwaves, as news ongoing, old. 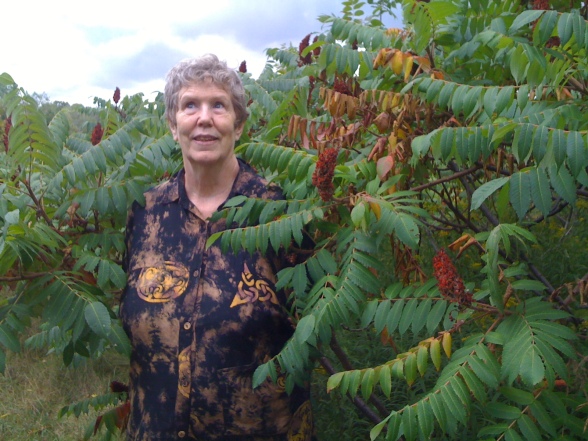 Photos of the poem by {poetry in Cobourg spaces} .

An Exercise in Erasure

a Poem without Posterity, a Poem in Pics

Cuz Fuzz As lovely (and acceptable) and welcome as Penn Kemp‘s words are … someone found them unpalatable (for some unknown and impossible to discern reason). Sometime between Noon and 2:00 p.m. on Sunday, September 17, 2017, someone had defaced the lines.

They scuffed many of the words away, plus they employed the little bit of water from a small bowl left out front of Meet at 66 King East for dogs to drink as they pass-by. That was used to wash away certain words — no one could make rhyme nor reason about why they picked certain words instead of others; in addition, they wrote and drew there what were taken to be words and symbols of a religious zealot. Was this the work of an actual religious zealot’s mind, or, was someone was pulling some sort of “performance art” put-on against against the purple rectangle … hoping we would give them a reaction, etc. … as if “trolls” emerged from online existence into the real life of King Street, Cobourg?

It is impossible to think of anything about the lines from Penn Kemp that would produce this response.

People can be odd.

The rectangle was washed clean. The first things removed by sweeping and with water were the add-ons of zealot-nature. It was only then that the thought occurred, “Oh, we should get photos of how it was defaced before washing it all away.” So, the slogans and drawings do not show in these photos. (That is probably just as well. Why broadcast the zealotry?) One of the photos shows outlined in red the spots where the drawings and religious sayings were shown.

Jf Pickersgill Thank you, Penn Kemp. Thank you to Wally Keeler for taking (and sharing) the photos.

The defacing is bizarre. I believe it has little to do with Penn (zero to do with her, actually) or anything in her words. There have been other recent instances on two or three occasions, where someone has spit on a word and then scuffed it with the sole of their shoe, and, where someone spilled the full contents of a slushie (purple and red in colour — grape & strawberry flavour, perhaps) all over Stanza Room Only when there were no words there at all. This purple rectangle of sidewalk may have become the focus of someone’s mental obsession (for whatever reason) … through no fault of Stanza Room Only’s own.

I saw the expressions of zealotry in the couple of hours that they showed before they were erased.

One was a drawing of a church with a Cross on the steeple.

Another proclaimed that “The end is near!”

Another was a hard-to-figure drawing that might have been a poorly drawn attempt at the ichthys (“Jesus fish”) — which ended up looking more like a shark circling around on itself to bite its own tail (now that I write that description, I think, “Hmmm. Maybe the best ichthys ever”).

There was something else there, too, that I cannot remember right now.

It was weird, not eerie in the context of every day life but strange in the context of some beautiful words of poetry presented for the public to read. Not an overly provocative act, even in comparison to some of the words people have chalked in Stanza Room Only during the past 3 years.

Because I am fascinated by the workings of human minds, I thought some clues might arise from examining which individual words were the target of the attempt to not-only-scuff the chalk but also to wash letters away with the tiny amount of water available in the bowl-for-passing-dogs.

“fare” “unjaded” “beans” “Three” and “thrive.” If there are clues there, I cannot uncover the meaning of the clues. It might be that there was no focus on specific words but a late dawning about the fact that the water was not going to go as far as was thought.

Penn Kemp Anti-feminist?Anti- Indigenous? (“The Three Sisters thrive”). Or random…Odd they left my name unscathed. I’m grateful for the documentation, visual and verbal! And for the opportunity to be inscribed on your sidewalk, momentarily:)!

Jf Pickersgill Well, your words were there for more than 24 hours. That is good, actually. Sometimes weather conspires to rinse away words earlier than that with rain or to erode the chalk with wind and non-deliberate scuffing from the shoes of passers-by can be the cause of early erasure, too.

Someone else with whom I had this discussion immediately came up with similar thoughts, Penn … “Is it because the words are pro-woman? Is it the call-out to First Nations traditions?”

Nina Grigg Well at least Facebook allows evidence of the original work to be preserved. The emotional impact of the words combined with the setting may be what led to its defacement. I wonder if the offender had any clue about the meaning of the poetry? It’s feels like a violent act, makes me feel a little nauseous. I think it is directed towards both the feminine and the indigenous (which are impossible to separate, I think.)

Jf Pickersgill Yes. That is an important point. It did cause distress to see this deliberate defacing activity. It did come across as deliberate aggression. Penn‘s words appearing in Stanza Room Only had strong impact, no doubt about that. It is difficult to conceptualize anyone taking these lines as having negative impact, though. Clearly that view might be naive.

I love how Tuck Magazine publishes topical new political and occasional poems!
News that stays news. Now I can share this piece with you.

and Trump remarks, “Just get out of its way”

and America turns her tough back on Dreamers

While Buddhists slaughter Muslims in Myanmar

While women are executed in dishonorable killings

and brinksmanship totters on the edge of Equinox…

Then tomatoes gleam scarlet in the green of harvest

and hummingbirds linger in sun before migrating

While September long shadows our yard in semi-annual

balance between light and dark. What can we maintain?

We have read about that perfect summer of 1914

before the dam burst in bloody floods of war

We recall an azure morning behind twin towers,

We do not know recompense. We prepare equanimity

In a world out of control we are not without hope

In calm arising before catastrophe, we sit and wait 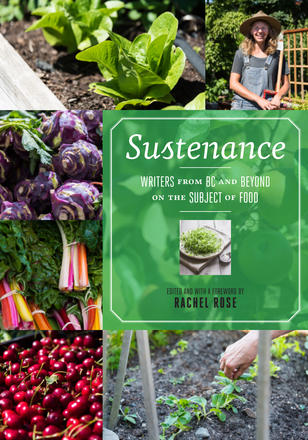 Sustenance: Writers from BC and Beyond on the Subject of Food. Rachel Rose, editor. Anvil Press Publishers, October, 2017. https://alllitup.ca/books/S/Sustenance#overview,

The anthology is launching October 22 in Vancouver! Wish I could be there but my poem will have to sustain:) http://writersfest.bc.ca/festival-events/sustenance-a-feast-of-voices/

Here’s my contribution to the feast:

I would eat local food only were it not for temptation.
A green invitation of open avocado in emerald halves.
An alluring variety of mango hot to eye, cool to tongue.

The seduction of dark chocolate.
The slurped fulfilment in oyster.
The simple necessity of rice.

Otherwise, I would be content with my yard’s fall produce.
But having tasted the world’s fare, how to return unjaded
to simple pleasures that this ground offers?  Beans.

Yes, I will eat local food mostly.  Except for.   Except for…
Accept.  Chocolate.  No chicory compares to caf頡u lait.
Ole!  Import coffee; import tea!  Import taunt.

On to political rant: our food too cheap, our farmers ruined.

Our eyes closed, we rest easy, spoiled ripe fruit in the docks,
turning sleepy to sun-rotten.  Given so much, we reach for more

even when over full.  And poems break off as the lunch bell rings. 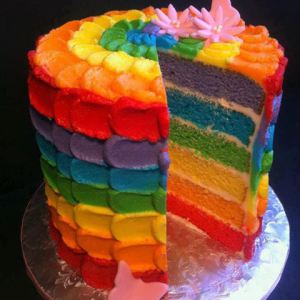 For the Rowan Bard

Words in proximity to one another

take on another meaning…What you

hear at a given moment is a refraction

of what’s gone before or after.

“Rowan is the tree of power, causing

life and magic to flower. Not to be

forgotten, set aside, or ignored.”

month. His jewel a garnet and flower

horse called after a folk name for Rowan.

Along with Delight of the Eye, Quickbane,

His planet Mercury, his element Fire,

clearing the mind to open inspiration.

Language the legacy he left.

Reading is a pleasure, but to finish reading,

to come to that blank space at the end,

is also a pleasure.

May his death have been such an ease

The poem is sad because it wants to be yours, and

Lines in italic by John Ashbery.

More of my poems are up on http://tuckmagazine.com/tag/penn-kemp/.